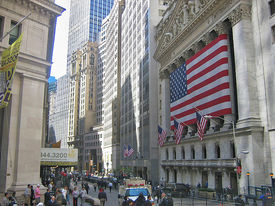 Wall Street is expected to close 2008 with record losses.

Wired PR News.com – The week ending 2008 may be the worst Wall Street has seen in decades. As reported by the Associated Press, indexes are anticipated to drop to record lows during the remaining days of December, which has investors ready to see the year come to an end.

As noted in the report, the Dow Jones industrial average has already dropped nearly 37 percent this year, which put it at its lowest point since the Great Depression. The Standard & Poor 500 is expected to end with record lows as well having already dropped over 40 percent, amounting to the lowest ever seen for the index, which was created in 1957.

January may bring a small ray of sunshine for Wall Street, but most expect a real sign of recovery to take months to surface. As quoted in the report of Scott Fullman of New York based, WJB Capital Group, “It is hard to gauge a recovery because there’s so many things out there that are interactive with each other… Nothing is in a vacuum. Anybody who is managing money has to be on the cautious side for at least the first six months of 2009.”