More Troops to be Dispatched to Afghanistan 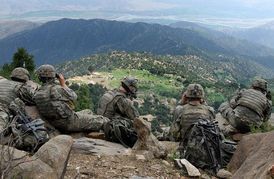 Obama will reportedly send more troops to Afghanistan.Wired PR News – President Barack Obama reportedly plans to send a larger number of troops to Afghanistan. As reported by the Associated Press (AP), Obama is set to announce his war strategy on Friday, which is expected to include the deployment of thousands of troops in addition to the thousands previously ordered for the Afghan war.Hilary Clinton, the Secretary of State, is quoted as stating of the administration’s plans to reporters in Mexico, “It is an integrated military-civilian strategy… We are convinced that the most critical underpinning of any success we hope to achieve, along with the people and government of Afghanistan, will be looking at where civilian trainers, aid workers, technical assistance of all kinds can be best utilized.”As noted in the report, Obama discussed the strategy with Congressional leaders Thursday.Photo Credit: soldiersmediacenter