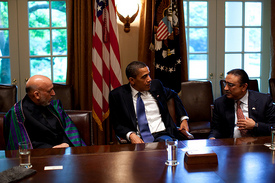 The U.S. president advised the Afghan president to take steps to end corruption within the country’s government.

Washington, D.C. (WiredPRNews.com) – President Barack Obama advised the president of Afghanistan, Hamid Karzai, to take additional steps to end corruption within the country’s government on Monday. As reported by the Associated Press (AP), Obama spoke on the issue following Karzai’s election win Monday after his competitor Abdullah Abdullah announced he would no longer be in the runoff.

Obama is quoted by the AP as stating of his phone call to Karzai, “I emphasized that this has to be a point in time in which we begin to write a new chapter… the proof is not going to be in words. It’s going to be in deeds.”

As noted by the AP, Obama is currently considering whether to send thousands of additional troops into Afghanistan.