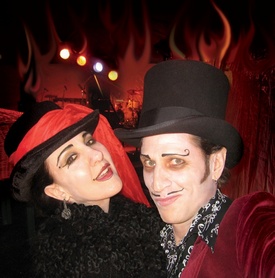 Due to the immense popularity of 62 of their first 75 shows sold out, Sarlot and Eyed are hosted again at the DoubleTree to reopen the show as a centrally located Tucson attraction. “We are very excited with this collaboration. It’s great to showcase an exciting downtown ‘Tucson Treasure’ every Friday and Saturday evening,” said Helinda Lizarraga, General Manager of the DoubleTree. Showing their appreciation to Carnival of Illusion ticket holders, before or after the performance in either hotel restaurant, the DoubleTree offers a buy one dinner entrée, get the second (equal or lesser priced) FREE!

Roland Sarlot and Susan Eyed, 2009 National Recipients for “Excellence in Magic”, were granted “Featured Performer” status during their 21-show run at Hollywood’s World Famous Magic Castle. They have performed as “house entertainers” at theworlds top resorts including Canyon Ranch and Miraval Spa.

Sarlot & Eyed transport their audiences back to a time when magic flourished as an art and was practiced in the salons and “parlours” of the wealthy. Carnival of Illusion offers a modern, hip edge to a Victorian-inspired parlour show. This intimate experience is limited to only 35 guests per show. You can catch their shows at 6pm and 8:30pm every Friday and Saturday at the DoubleTree Hotel Tucson at Reid Park beginning September 2010. Tickets available at www.carnivalOFillusion.com or (520) 615-5299.

About: Roland Sarlot and Susan Eyed are National recipients for “Excellence in Magic” awarded by the oldest magic convention in the country. Fox News called them, “Outstanding”, the LA Weekly wrote “Amazing”, the Tucson Weekly, “Extraordinary!” and the Tucson Citizen said, “Best show in Tucson.” These entertainers tour nationally sharing their love and respect for the ancient Art of Magic.

For more information, visit the Press page at www.carnivalOFillusion.com or contact Brooke Rosania at [email protected], (520) 615-5299.