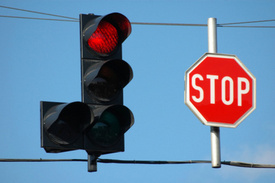 Tampa, FL (Tampa Car Accident Lawyer News)—A red-light runner landed his victim, a Pasco County sheriff’s deputy, in the hospital with a broken pelvis following a Sunday morning wreck. The two-vehicle collision occurred on August 22, 2010, around noon at the intersection of Little Road and Denton Avenue near New Port Richey, as reported by the St. Petersburg Times.

The Florida Highway Patrol (FHP) reported that Deputy Ryan Lennox, 24, was traveling westbound on Denton Avenue when he reached the intersection of Little Road and collided with a northbound Ford F-150, who ran the red light at the intersection. The Ford pick-up truck subsequently t-boned the patrol car, injuring both drivers.

Lennox was airlifted to Bayfront Medical Center for treatment of a broken pelvis. Lennox was reportedly in critical condition when he arrived, but has since been upgraded to good condition.

The driver of the pickup truck, Kurt A. Gell, 30, was also injured and was transported by ambulance to Bayfront Medical Center as well. Gell’s injuries were described as minor and considered to be non-life threatening.

FHP troopers said Lennox was on duty at the time of the accident, and Gell will be cited for running the red light.

A full investigation is underway.

The Florida Gulf Coast automobile accident attorneys at the law offices of Shapiro, Goldman, Babboni and Walsh, are prepared to help you seek justice and fair compensation if you or some you love has been hurt or killed due to another person’s negligence. David Shapiro, an experienced car accident attorney with a positive track record of litigating accident claims may help you recover damages that you deserve.