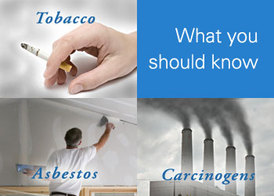 The Woodlands, Texas (WiredPRNews.com) – Lung Cancer Answers released a handy chart summarizing risk of lung cancer due to more than one cause. The chart is shown on the webpage http://www.lung-cancer.com/risk.html.

Smoking is the leading cause of lung cancer, but it is not the only cause. Every year thousands of Americans with no history of smoking are diagnosed with lung cancer. Other causes include radon, asbestos, air pollution, and second-hand smoke.

Lung cancer strikes over 170,000 Americans every year. Approximately 1 million people worldwide die of this form of cancer every year according to the World Health Organization. It is by far the leading cause of cancer death recognized as a major public health problem.

Studies have shown that a person’s risk for developing lung cancer is substantially higher if they have have been exposed to more than one cause in substantial quantities. While smokers have approximately 11 times the risk of developing lung cancer as nonsmokers, smokers with asbestos exposure are estimated to have 59 times the risk that nonsmokers with no asbestos exposure have.

Asbestos is a powerful carcinogen and can cause cancer in the absence of other factors. When people who smoke are exposed to asbestos fibers, the double-whammy to the lungs increases the risk of cancer considerably. Lung cancer is particularly insidious because the latency period can be decades long, meaning the symptoms of the cancer don’t show up until years after exposure to the asbestos and tobacco smoke. The cancer is frequently in Stage 4 by the time it is diagnosed. At this advanced stage, treatment options are limited and have low success rates.

The medical establishment has warned about the dangers of smoking for years, but millions continue to use tobacco. Asbestos has been known to be hazardous to human health for even longer. Ancient Roman commenters noted slaves in the asbestos mines developed breathing problems, probably what we today we call asbestosis. Through the 20th Century, asbestos was used widely in building construction, consumer products, and military applications. Records show that asbestos manufacturers knew about the hazards of asbestos during this time. Starting in the 1970s OSHA and other regulatory agencies started limiting employee exposure to asbestos in the workplace. However, the legacy of asbestos usage continues to cause health problems years later.

For more information on the elevated risk caused by exposure to both tobacco and asbestos, visit http://www.lung-cancer.com/risk.html