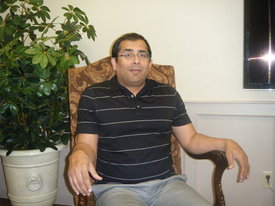 Paris, Texas – Dr. A.J. Hashmi, a native of Pakistan who is the doctor of one of the country’s prominent leaders, was an unlikely candidate for the coveted position in Paris, both initially by personal choice as well as the history of mayoral elections within the small town. The decorated cardiologist, who received his primary education in a Catholic school prior to moving to the United States to train as a internist and cardiologist shortly after, moved to Paris later in his career to assist with the development of a local cardiology program, which was in need of significant improvement. Hashmi says he liked the small community, and decided to stay upon completion of his initial task, eventually running for city council.

Hashmi says he has always had an interest in philanthropic endeavors, but was not always interested in obtaining a political position within his home community. However, upon hearing of past plans of the Texas Workforce Commission to cut unemployment benefits for individuals who needed them, in the midst of the Christmas holiday, a spark was lit that led him to envision a different kind of Paris in which support for those in need could be obtained from a system built within, as opposed to widespread reliance on government sustenance. He says that choosing to run for city council, and subsequently accepting an unexpected nomination to become mayor, was a means to achieve his philanthropic goals from a position of strength, where he could be taken seriously when presenting his ideas on improving the economic stability of the city overall.

Running for the Paris City Council on a platform of economic development, Hashmi indicates he seeks to use his position to confront long standing issues in Paris, which some locals regard as “the best small town in Texas,” as expressed on a local billboard. Hashmi stated in an interview with WiredPRNews.com, “my platform was economic development of Paris, and I’m not saying that economic development is the answer to all the problems…but you know something, in a happy community, which is flourishing economically, all the downsides such as crime and etc automatically go down.”

In addition to heading a cardiology program, Dr. Hashmi has a lot on his plate for improving the economy of Paris. Although it is a tall order, Hashmi is confident in his ability to achieve his vision, despite the many obstacles he may face, which includes finding an effective solution for bridging the racial gap. This is something that has become a blemish on the reputation of the town.

Paris, Texas made national headlines in 2007 following the court case of a 14 year-old African American female student with no criminal record who was sentenced to up to seven years in a detention facility for the alleged shoving of a hall monitor. Protestors attributed the excessive punishment of the teen to racism, and cited another case in which a 14-year white female, convicted of arson received probation. The town was again the focus of a national media frenzy following the 2008 dragging death of 24 year-old black man, Brandon McClelland. The two white individuals charged with killing McClelland were released from custody after the local prosecutor, who was once the defense attorney for one of the men charged, cited a lack of evidence in moving forward. These and other incidents in which racism was an alleged influencing factor in how the local school districts and courts responded to them have left a purported need for improved dialogue on how to address racial concerns.

Hashmi believes the reception of him for many in the town thus far is indicative of a belief in his ability to lead the charge in mending fences with regards to race relations and effectively meeting the needs of the community citing, “They crossed the barriers of religion, race, color, and place of birth to vote for me…No where in the world, even in the country where I came from, you will not see those barriers crossed.”

He further notes, “In spite of all of our problems, we are ten thousand times better off than a lot of other places in the world. Because of the freedom that we have, we are at least able to talk to each other about the problems we are having.”

Belief in Hashmi’s leadership abilities surfaced very early in his career. He became the Director of Interventional Cardiology at the Pepin University Heart Hospital in Tampa, Florida, despite being the most junior person in his program.

Regarding a need for improvement of local race relations, the new mayor asserts, “Closing the eyes to the issues does not resolve the problem…we all need to be tolerant of each other. We are one country. We are all Americans. ”

With regard to his decision to accept a term as mayor, after running for city council, then being nominated and chosen over an incumbent council member Hashmi asserts “I hope people realize that the purpose of doing it was so that we can bridge all of our gaps and bring people together.” He indicates his belief in the importance of taking a humanistic approach in dealing with people in all circumstances in stating, “I see people all day long, when I walk into a patient’s room it doesn’t matter whether they are black, white, brown like me, rich or poor….if they are sick, they are sick. I’ve taken care of the richest and I’ve taken care of the poorest….throughout my career, I’ve never sent a single person to collection.”

Hashmi says of his intended approach to address a range of other local needs and concerns, “Where there is a will there is a way…My goal is to have such financial stability of the city that all of these issues…go down. Am I saying that they will be eliminated? No, but some of the behaviors are a mindset of people. You may not be able to change the mindset completely, but you will have improved it so much that you will decrease all of those problems that you face in the city.”

Of the big picture Hashmi states he hopes “to make Paris such an ideal place that we all support each other enough so that we don’t need federal help [individual welfare assistance]…if one has a problem others are there to help.”

“People change, times change, and I’m hoping that during my tenure it will happen…that we become known as one big happy prosperous community…an example for all others.”

Time will tell whether the new mayor will be able to rise to the challenges he faces in the eyes of the Paris community, which will have bearing on his decision to run again. He declares, “I will run again if I’m successful, and I’ve never been unsuccessful in anything in life.”