The Historical Riverside in Reno, more than one hundred years of hospitality 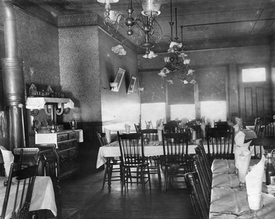 RENO, NV – January 28, 2013 – Many have forgotten the historical relevance of the once glamorous Riverside Hotel, but Wild River Grille continues to serve up the same outstanding service that has embodied the building all these years. The Riverside Hotel has been a fixture of the Reno community and downtown skyline for more than 130 years. The Lake House was the first structure on this spot along Virginia Street just south of the Truckee River. Myron C. Lake considered to be Reno’s first citizen, built the lodging and resting place in 1870. Lake had purchased the land and adjacent bridge crossing from Charles W. Fuller nine years earlier. The Lake House provided plenty of drink yet modest accommodations to the prospectors, settlers, and others who traveled through the valley. The building switched hands over the years but it’s stories have always remained as a rich part of the local Reno community.

The Riverside was at one point Reno’s most prestigious dining and entertainment venue of the region, with the legendary Mapes Hotel standing nearby and the dynamic Truckee river sitting at it’s base. A variety of famous cinematic stars, and performers such as Ava Gardner, Frank Sinatra, boxer Jack Dempsey, Sammy Davis Jr., Clark Gable and Marilyn Monroe have wined and dined in the halls of the historic Riverside. Many guests took up accommodations in the glamourous rooms while awaiting there divorce decrees, during the famous Divorce Craze of the 1950’s. It was even rumored that mobsters; Baby Faced Nelson, John Dillinger, and Pretty Boy Floyd were spotted around the Riverside in the 1930’s as the hid out from local authorities.

The Riverside has been subject to damaging fires and floods over the years and stood vacant until 1997, when members of Sierra Arts Foundation, a local nonprofit arts organization, approached the interest of Artspace, a Minneapolis-based developer of artist live/work space in historic buildings. With the assistance of the City of Reno, the Sierra Arts Coalition and the members of the community developed a plan to save the property. The 1949 addition of the building was demolished and the original hotel rooms where converted by Artspace into thirty-five artist lofts featuring large, open floor plans. The floor level of the Riverside has been home to a variety of retail establishments over the ages such as a bicycle shop, restaurants, cigar store and even an airline reservation service. Artspace continued use of the retail space and not soon after a portion of the building facing the river had taken residence by business partners Chuck Shapiro and Doug Holter.

The June 2007 grand opening of the Wild River Grille was merely the continuation of decades of dedication to the concept of hospitality, with the goal of carrying on the reputation of service and entertainment the property had always encompassed, this summer the Restaurant will be celebrating it’s sixth year in business. Combining over 50 years of experience, co-founders Chuck Shapiro and Doug Holter had been friends for 15 years before deciding to embark on their joint endeavor. What was created is Reno’s finest combination of service, food, and spirits delivered in a casual, fun and relaxing environment. Located in the historic Riverside Hotel building, and part of the vibrant Downtown Riverwalk Arts District, the grille celebrates music, art and nature. From the hand-crafted Ponderosa Pine bar and nature inspired dining room, to the expansive riverfront patio complete with bandstand, you will be served delicious creations and treated with genuine warmth. “Our dedication to your enjoyment is why the Wild River Grille is now the fastest growing restaurant in Reno.” Says owner Chuck Shapiro. The property is bursting with personality, with it’s original brick walls and old images of the buildings past adorn the walls of the restaurant. The owners and staff have never forgotten the significance of the location or the building and embrace the rich culture of the community in every dish they serve.

The 2010 opening of the Wild River Grille’s sister establishment the River Room was the continuation of our commitment to the revitalization of Downtown. The restaurants together offer a spectacular array of culinary delights, great drinks, music and ambiance. Open year-round, 7 days a week for lunch, dinner, drinks and specializing in large groups and parties, the River Room is an experience to remember, and features large images of Old Reno purchased from the Nevada Historical Society.

Both venues feature a regular calendar of live music, wine tastings, bourbon samplings and provide a fresh and exciting ambiance to downtown. The open nature of the dining room offers all guests (including the bar patrons) a front row seat to the sights and sounds of the city and always without a cover charge.

When visiting the Riverside you can’t help but feel as if you are surrounded by legends, and stories of glamorous people still enjoying expensive cocktails and listening to Big Band while they enjoy the same views we have today overlooking the beautiful Truckee River.