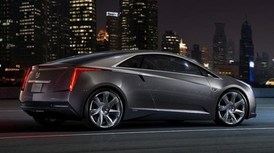 Cadillac is pleased to announce that the 2014 ELR is the newest addition to the Voltec family. It’s hoped by dealerships nationwide that the popularity of this two-door, luxury sports coupe will extend far beyond that of the Chevrolet Volt, which is currently leading the pack when it comes to electric vehicles.

The ELR is likely to hit the production line for distribution at any time. It is anticipated that it will touch ground sometime late in 2013.

“The ELR will set the tone for electric vehicles in the future as well as show the typically upscale customer GM’s new technology they more than likely haven’t looked at in the Volt,” stated Kevin Giguere, a leasing and sales specialist at Orlando Cadillac stores. “It has quickly become the talk of the town due to its seamless combination of art and science, coupled with advances in the electric propulsion system and on-board-gas-powered generator.”

The car has been built on the basic concept of Cadillac Converj, which made its debut at the Detroit Auto Show in 2009. Still there are some basic differences, including sporty proportions like the addition of anti-torque-steer front struts, Watts’ link towards the torsion-beam rear suspension and adaptive dampers with fitting computer controller. The automobiles wheels are 20-inches in diameter and the new electric drive system gives the 2014 Cadillac ELR more than 58 horsepower output over the Chevrolet Volt.

ELR engineers are quoted as saying that the car can accelerate from 0 to up to 60 in just 8 seconds. The car provides more weight with a compressed aerodynamic version than the Volt, which provides a drag coefficient of 0.31 and provides an opportunity to manually engage the propulsion system of the car in high-regen mode for the driver. The interior designs of the 2014 Cadillac ELR also provides a different feel than what is available with the Chevrolet Volt.

Central Florida Cadillac looks forward to sharing the first ever Cadillac-brand electric vehicle release with their customers. As anticipation grows by the day we hope to have the Cadillac ELR in Orlando sooner than expected.