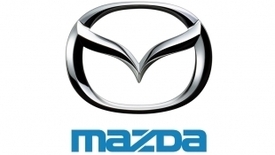 The Mazda CX-5 has been a popular item since launching for the 2013 model year as the automaker’s first vehicle to feature a full suite of fuel-saving SKYACTIV technologies, and soon, it will be welcoming a smaller sibling to the family. Slated to debut at the LA Auto Show later this month, the all-new Mazda CX-3 compact crossover SUV will follow in its older brother’s footsteps by not only receiving the complete complement of SKYACTIV technologies, but by also donning the brand’s new KODO, or Soul of Motion, design language.

Beyond the fact that it will become the fifth Mazda vehicle to fully embrace SKYACTIV and KODO, few details have been released about the CX-3 ahead of its Los Angeles debut. However, a teaser photo does reveal a bold pentagonal grille similar to that found on the CX-5, as well as an elongated hood that flows into a raked windshield and a backward-sloping roofline. Set to take on vehicles like the Chevrolet Trax, Kia Soul and Nissan Juke, the new Mazda CX-3 is expected to go on sale next year.

“If the success of the CX-5 is any indication, the new Mazda CX-3 will be a hot commodity because of its aggressive exterior styling, its engaging ride and its impressive fuel efficiency,” said Tom McGovern, general manager of Rosen Mazda Waukegan, a Chicagoland Mazda dealer. “The CX-5 is the most fuel-efficient SUV on the market during freeway driving, and we expect that the CX-3 will provide buyers with even better gas mileage.”

When equipped with its standard SKYACTIV-G 2.0-liter four-cylinder engine and SKYACTIV-MT six-speed manual gearbox, the 2015 Mazda CX-5 returns up to 35 mpg on the highway. For swifter acceleration, buyers can opt for a SKYACTIV-G 2.5-liter four-cylinder with 184 horsepower and 185 pound-feet of torque that are transferred to the wheels by a SKYACTIV-Drive six-speed automatic transmission. Even with the CX-5’s focus on fuel efficiency and responsiveness, the strength of its SKYACTIV-Body and SKYACTIV-Chassis helped the crossover SUV earn a 2014 Top Safety Pick+ designation from the Insurance Institute for Highway Safety (IIHS) earlier this year.